What Is Public Safety DAS?

National fire code guidelines provided by the NFPA (National Fire Protection Association) now mandate that all new buildings with certain features (building size, number of levels, total square footage, or existence of an underground level) to have a Public Safety Distributed Antenna System (also referred to as DAS) to provide for wireless coverage frequencies used by first responders in case of emergencies. Such a system is also known as Emergency Responders Radio Communications Systems or ERRCS for short. 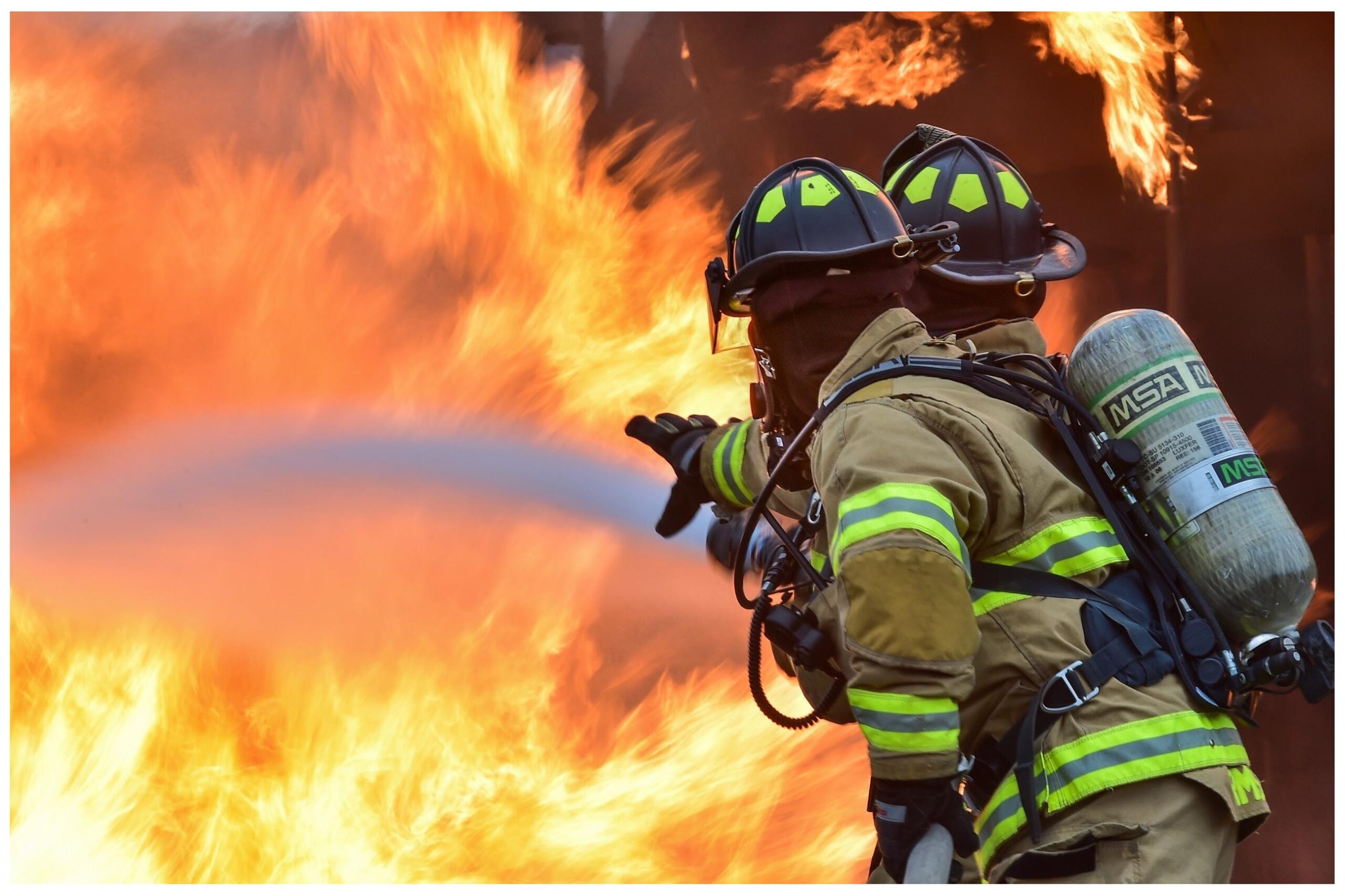 Public Safety DAS is installed to enable first responders within the building to communicate with each other and their base during an emergency. It is NOT to be confused with a commercial DAS system which provides signal from commercial carriers, such AT&T & T-Mobile. Public Safety DAS or (ERRCS) must be on a different spectrum from commercial wireless and covers the entire building, including basements and stairwells – areas where having commercial wireless signal is NOT critical. Public safety DAS must also have backup power  in case of an outage. Critical Areas, such as a fire command center, fire pump room, exit stairs, exit passageways, elevator lobbies, standpipe cabinets, sprinkler sectional valve locations, and other areas deemed critical by the authority having jurisdiction are required to provide 99 percent floor area radio coverage for specific frequencies the first reponders in that jurisdiction use.

While most cities have adopted this mandate and require a DAS system for first responders’ use, specifications for what is required vary from city to city.  The most important variation is in frequencies to be included in a system since not all cities’ Fire and Police departments use the same frequencies. These variations also apply to codes adopted and applied to required infrastructure for the DAS or ERRCS provisions; for example, whether or not wiring pathway should be in conduit or whether or not  it needs to be enclosed within a 2-hour rated assembly.  Variations also exist in how often a given AHJ (assigned electrical and fire inspectors) enforce  city adopted guidelines/codes in their review of the  infrastructure. As a result, the AHJ for the project address is the best source of information for what specific guidelines are attached to a DAS system to be provided for the project.  Even when all requirements for a Public Safety system are set and documented by the city, the interpretations of the AHJ inspectors assigned to the project ultimately decide what is specifically required.

The rendering below is a detailed graphic illustration of a Public Safety System:

A Public Safety DAS Closet/Room is created in a 2-hour rated space typically on a Parking level in smaller buildings (see 5 in below illustration). This Closet head-end features a radio signal sender and receiver (BDA) (See 3) and its power supply (See 4). The radio is programmed to receive and send signals over frequencies required by the city emergency responders. 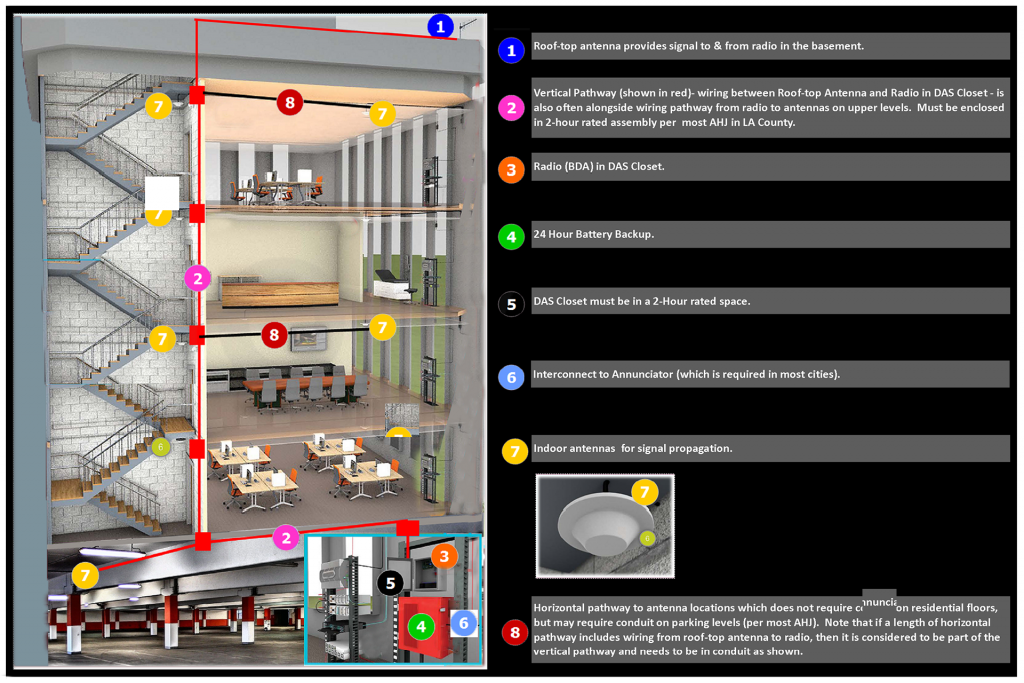 Link to our TIPS on Public Safety DAS Requirements for Builders, Developers, & Architects

DAS or Distributed Antenna Systems for various purposes have existed in some form in commercial projects for nearly 20 years.  However, Public Safety DAS is a new mandated provision in most cities in the country for all new commercial projects.  It is also known as ERRCS (Emergency Responders Radio Communication System) in some municipalities.  Its purpose is to provide for an in-building system to tie into a communications network for first responders in the same city. This network essentially re-transmits fire or police radio frequencies from outside a building, where the signal is presumably stronger, into the building, where it usually is weaker or non-existent. Below we are offering detailed illustration of this system, along with typical questions developers may have in connection with this mandated provision.

LIST OF OUR PUBLIC SAFETY DAS (ERRCS) PROJECTS SINCE 2018

PUBLIC SAFETY REQUIREMENT IN THE CITY OF LA

As mentioned earlier, the City of Los Angeles has the most stringent requirements attached to Public Safety. While all municipalities have adopted the general guidelines with regards to how much signal is required and where the City of LA has additional mandates which most of its inspectors are aware of and enforce. Currently, the following is what we know is required as of Sep 2018:

Question: How do I know our new construction is subject to this requirement?
Answer: Based on current national codes and adopted by the city of Los Angeles and most other AHJ, If any of the following are true of your property development, then this mandate applies to your project: Question: Our project meets one or more of above stipulations and the city inspector or departments have not asked for Public Safety provisions; does that mean we are not subject to it?
Answer: We have already seen two instances where the city inspector did not inform the developer or general contractor that a public safety system was required in a fully framed new construction. We also know of one electrical inspector actually passing and signing off on the final electrical inspection of a new building without noting that a public safety system was required or needed to be inspected, but the fire department inspector noted that in its inspection. Given the scale of work to be inspected by an electrical inspector, the lack of provisions for public safety may not even be noted. Therefore, the city electrical inspector may not even notify you that a public safety system is required in your project, but the fire department WILL know because that department’s scope of inspection of your project is far more limited and their agents will look for it when they inspect the fire provisions. You will not get a final CFO without fire department testing not only typical fire-related systems but also a Public Safety system which they will test.
Question: Our architect believes that given the small size of our building we can get a test and see if our building even needs a Public Safety system and avoid spending $50K plus for such a system?
Answer: It is true that some smaller buildings with NO underground parking will have enough signal in the interior and escape routes for first responders to get signal. However, chances of that happening with a subterranean garage are very small and no city inspector wants to have the responsibility of deciding that you will have adequate ambient signal even on above ground levels. The final say as to whether or not a Public Safety DAS is required at your building is the AHJ and its inspectors. Also, a test during construction has little value because results will change once project is completed (building becomes more dense and less signal gets through) and is occupied; therefore a test offers the ownership only the benefit of proving a positive in that a system is needed even though the project is not complete.

GUIDELINES FOR DEVELOPERS IN CITY OF LA

Once you determine Public Safety DAS System (ERRCS) provisions are required in your project, the first step is to acquire a design based on your architectural plans. A highly specialized software used by RF engineers will analyze architectural plans to predict where the signal may be below code. It will then create a design showing the signal pathway, junction points, and all locations requiring indoor antennas.

Public Safety (ERRCS) installation firms often provide you with a design, sometimes at no charge. However, typically such firms are likely to provide you with a design incorporating their preferred gear. The best practice for a developer is to ask and pay for a design submitted by a third party design engineering team. The developer can then ask different subs/ installers for multiple bids on the same design, rather than getting multiple bids on various designs & systems submitted by various public Safety installation firms.

Once you have selected an installation team, you will authorize that subcontractor to submit your design with their own notations on the design to the City of LA’s fire department for review. This should ideally be done prior to main deck over garage being poured in order to accommodate sleeves into the garage levels where by city code all wiring must be enclosed in red EMT conduit. This submission should take place at least 45 days prior to needing approval.

City of LA requires the design to show all pathways and location of all its elements along with heat-maps and various reports showing expected signal, all to be printed on 24×36 paper to be reviewed by a city inspector. There is no charge for the review, but once the design is accepted, the fee for review and permit by City of LA Fire Department is typically in the $700 to $1100 range. Post that approval and fee payment, there are additional fees for electrical permit and inspections. That fee will be based on the scale of the project.

No developer should allow a public safety system to be installed before the city has reviewed the design and approved it. Upon completion of the system, both electrical and fire department will inspect the system. The electrical inspector will not examine signal generated by this system but will enforce all the other electrical codes related to the system’s elements & pathways. Conversely, the fire department is primarily focused on signal generated and will test the signal upon its completion to make sure calls generated from different areas of the venue are successfully made.